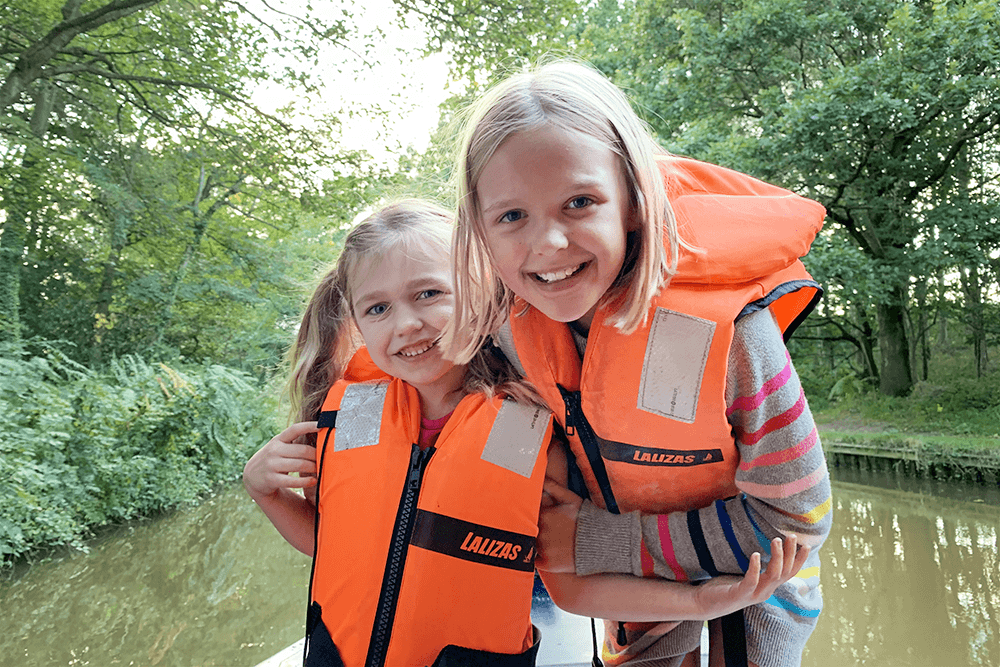 Holiday from a narrowboat to explore the countryside with children

Britain’s network of inland waterways wind through thousands of miles of countryside.

And they can be explored on a family trip with a difference – staying on a narrowboat – your own floating holiday home.

Here are some of the most popular routes to inspire you from Anglo Welsh, one of the largest canal boat holiday companies in the UK,

Start from Anglo Welsh’s narrowboat hire base at Wootton Wawen, on the Stratford Canal near Henley-in-Arden. It takes around six hours, travelling through 17 locks, to reach Stratford upon Avon.

Travel over the Edstone Aqueduct and on through the Warwickshire countryside and stop off at Mary Arden’s Tudor Farm in the canalside village of Wilmcote, where Shakespeare’s mother grew up.

Once in Stratford, there are overnight moorings in Bancroft Basin, perfect for enjoying all that Shakespeare’s birthplace has to offer, including riverside parks, theatres, shops, restaurants and museums.

2. Staffordshire to the Peak District

Cruise into the Peak District on a week’s break from Anglo Welsh’s barge hire base on the Trent & Mersey Canal at Great Haywood in Staffordshire.

From here, you can reach the beautiful Caldon Canal and travel into the Peak District.

The journey takes boaters up to Stoke on Trent, passing Wedgewood World along the way, and, once on the Caldon, through hills and wooded areas alongside the River Churnet.

Here there’s the chance to spot kingfishers, herons, jays and woodpeckers, as well as otters which have recently returned to the area.

The return journey along the Caldon to Froghall, takes around 43 hours, travelling a total of 72 miles and passing through 70 locks.

Travel round the Stourport Ring through stretches of Worcestershire countryside – on a week’s break from Anglo Welsh’s canal boat rental base at Tardebigge on the Worcester & Birmingham Canal near Bromsgrove.

MORE:  An English airport reopens to passenger flights after 26 years

This popular circuit takes boaters on an 84-mile, 114-lock journey, in around 56 cruising hours.

Rural highlights include Kinver Edge with its extensive woodlands and National Trust Holy Austin Rock Houses, idyllic stretches of Worcestershire countryside along the River Severn and a dramatic flight of 30 locks at Tardebigge, climbing two-and-a-quarter miles with views of the open countryside all around.

This circuit also takes boaters through central Birmingham, Kidderminster and the ancient City of Worcester with its magnificent cathedral.

Cruise to the gateway of the Yorkshire Dales and explore the ancient woods at Skipton Castle, from Anglo Welsh’s canal boat hire base at Silsden on the Leeds & Liverpool Canal in West Yorkshire.

It takes just over three hours to reach Skipton with its medieval fortress and acres of woodland trails to explore. For nearly a thousand years, Skipton Castle Woods provided fuel, food and building materials for castle inhabitants. Today there are at least 18 species of trees flourishing there and hundreds of flowering plants, including wild orchids and bluebells in the Spring.

The journey along the Leeds & Liverpool Canal to Silsden passes through the typical Yorkshire stone-built villages of Kildwick and Farnhill and on into a dense wooded area famous for its bluebells and deer.

Drift through the prehistoric Vale of Pewsey – it takes around 19 hours to reach Pewsey Wharf from Anglo Welsh’s canal boat rental base at Brassknocker Basin on the Kennet & Avon Canal just outside Bath, perfect for a week afloat.

MORE:  Canal boat holiday guide for beginners - EVERYTHING you need to know

Along the way, boaters pass through miles of Wiltshire countryside, with a series of waterside villages and country pubs to visit along the way.

Highlights on this route include the mighty Caen Hill Flight of 29 locks at Devizes, cruising along the edge of the ancient Savernake Forest and the beautiful Vale of Pewsey, part of the North Wessex Downs Area of Outstanding Natural Beauty and home to prehistoric Avebury.

The journey to Pewsey and back takes around 38 hours, passing through 74 locks (37 each way).

Travel to Llangollen on the edge of the Berwyn Mountains. It takes around 12 hours to reach this pretty town from Anglo Welsh’s canal boat rental base at Whixall Marina, on the Prees Branch of the Llangollen Canal in Shropshire.

Along the way, travel through the Shropshire Lake District and across the incredible Pontcysyllte Aqueduct, one of the ‘Seven Wonders of the Waterways’ and now a UNESCO World Heritage site. 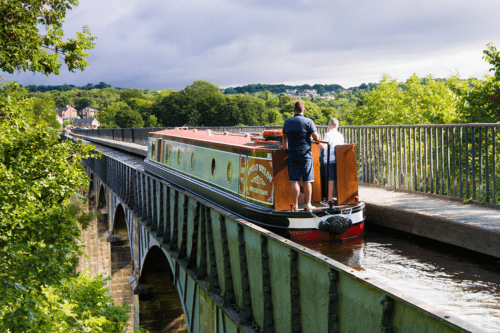 Once in Llangollen, boaters can moor up to enjoy exploring the town including its regular markets packed with local produce, shops, restaurants, steam railway and famous Horseshoe Falls.

The journey to Llangollen and back passes through just four locks (two each way).

Start a week’s break at Anglo Welsh’s canal boat rental base at Bunbury on the Shropshire Union Canal in Cheshire and  travel round the popular Four Counties Ring, one of the most rural canal cruising circuits.

Rural highlights include panoramic views from the flight of 31 locks (also known as ‘Heartbreak Hill’) between Middlewich and Kidsgrove on the Trent & Mersey Canal, stunning views of the rolling Cheshire Plains on the Shropshire Union Canal, acres of farmland on the Middlewich Branch, wildlife spotting at Tixall Wide on the Staffordshire & Worcestershire Canal and the National Trust’s Shugborough Hall with its extensive waterside gardens.

MORE:  Annual passes and membership at top attractions across the UK in 2022 - our tips and advice

Cruise to the Shropshire Lake District from Anglo Welsh’s narrowboat hire base on the Llangollen Canal at Trevor in North Wales on a short three or four-night break (three or four nights). You may catch a glimpse of heron chicks and other water birds and wildlife. 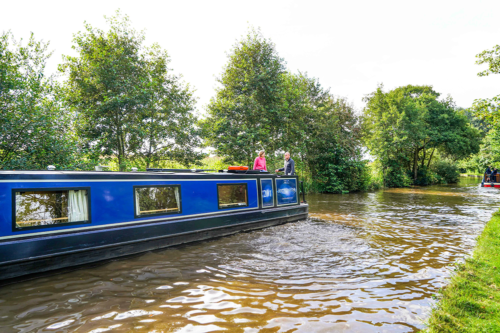 The journey to the medieval market town of Ellesmere takes around seven hours, passing through just two locks and over two magnificent aqueducts, including the famous Pontcysyllte Aqueduct.

This Wonder of the Waterways, carries the Llangollen Canal 38 metres high above the Dee valley, with magnificent views of the valley and Welsh Mountains beyond.

Formed thousands of years ago by the melting of the glaciers during the retreating ice age, the meres of the Shropshire Lake District, including The Mere at Ellesmere, are particularly beautiful in Spring.

And every Spring, Moscow Island on The Mere is home to the Heron Watch Scheme, with live images allowing visitors to watch the birds build nests and raise chicks.

Take a Thames boating holiday to Abingdon from Anglo Welsh’s narrowboat hire base on the River Thames near Oxford.

It takes around five hours, passing through six locks and travelling 15 miles to reach the historic riverside market town of Abingdon – perfect for a short break.

Along the way, as well as cruising through the outskirts of the ancient city of Oxford, you will pass through stretches of Oxfordshire countryside, with meadows, stretches of woodlands and the chance to hear cuckoos calling.

MORE:  The eight best places for children on and around the Llangollen Canal

Once moored up at Abingdon, boaters can enjoy exploring riverside walks, parks and eateries, including the popular waterside Nag’s Head.

Travel through the Northamptonshire countryside to Stoke Bruerne on a four-night break from Anglo Welsh’s canal boat hire base at Stockton, on the Grand Union Canal in Warwickshire.

Narrowboat families can cruise to the village of Stoke Bruerne and back.

The journey takes around 12 hours, travelling 28 mostly rural miles and passes through 16 locks, as well as the 2813-metre long Blisworth Tunnel.

Once in Stoke Bruerne, you can visit canalside pubs, browse the waterway history collections at the Canal Museum and follow the village’s woodland walk and sculpture trail.

RELATED CONTENT: Canal boat holiday guide for beginners – EVERYTHING you need to know

RELATED CONTENT: Our 10 top tips for taking children on a canal boat holiday

RELATED CONTENT: We review an Anglo Welsh canal boat with our children – is it family friendly?

Anglo Welsh offers over 160 canal boats for hire from 11 bases across England and Wales, with accommodation for between two and 12 people.

Hirers are provided with life jackets on request and boat steering tuition as part of all its packages.