The best things to do in Stratford-upon-Avon for families 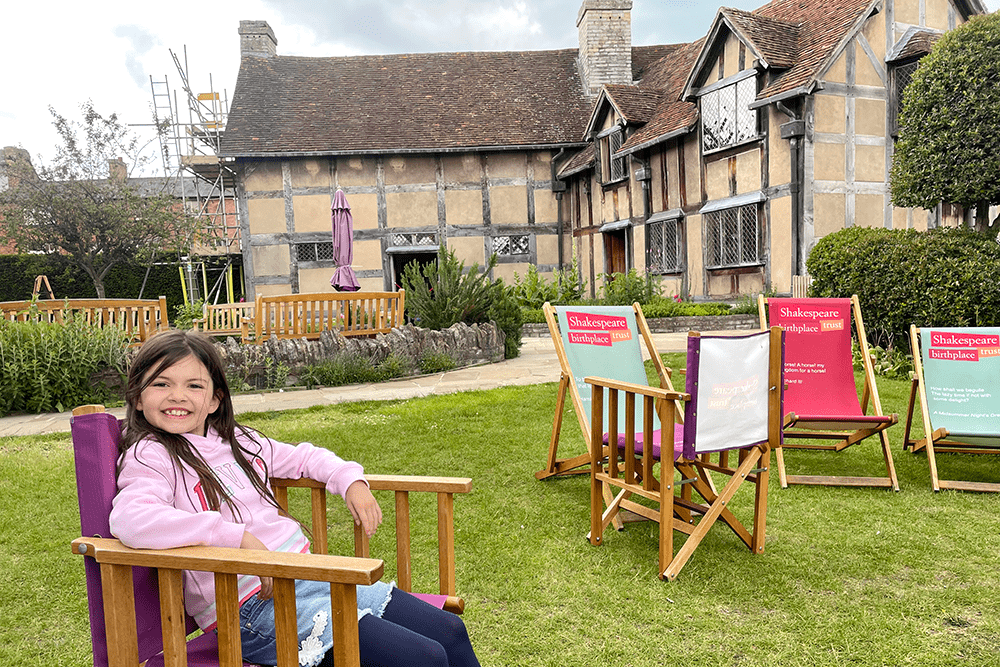 Where to visit with children in stunning Stratford, home of William Shakespeare

The medieval market town of Stratford-upon-Avon is famed for being the birthplace of English playwrite and poet William Shakespeare.

Many of the family attractions here are linked with the famous writer of plays such as Romeo and Juliet and Macbeth, but not all.

Here are some of our favourite places to visit in Stratford. 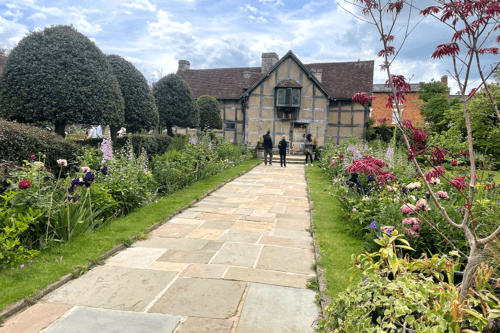 His father lived and worked in the house for 50 years and William was actually born there in 1564.

After William married Anne Hathaway at the age of 18, they stayed at the house and their own three children were born there.

We really liked using the QR codes dotted about which we could use via a mobile phone to bring the information to life. 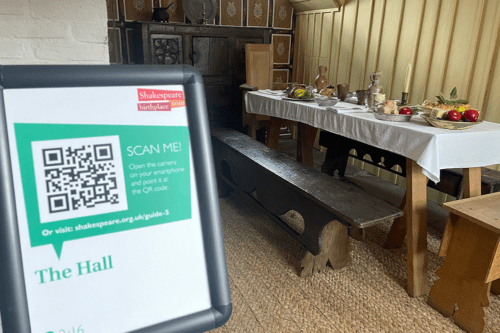 Another great resource is a wall of synopses of Shakespeare’s different plays which my son spent some time reading. 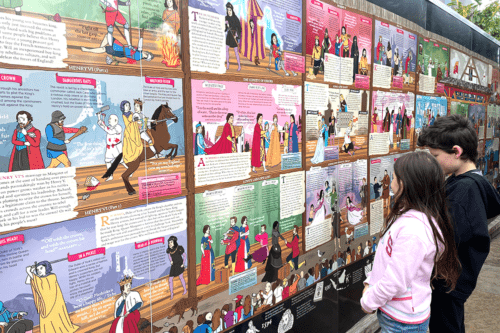 It is great to go inside the small house at the end of the tour, where knowledgeable guides in each room explain to children what life would have been like in Tudor times.

MORE:  Children’s television favourite Peppa Pig inspires families with her top 25 adventures to have around England

Time taken: Allow around an hour.

This is the school where William Shakespeare was taught in the 1570s, where he wrote his first works and saw inspiring actors perform plays.

Shakespeare was able to attend this local grammar school as his father was Mayor of Stratford.

The attraction is guide-led and their passion and enthusiasm for the building shines through.

The best bit is where you get to sit in the schoolroom with an actor playing the part of Shakespeare’s teacher Master Thomas Jenkins. We even had a Latin lesson. It is very interactive with adults and children getting involved in the fun. The 20-minute lesson was a real highlight of our visit, especially when our daughter got to play the part of Julius Caesar. 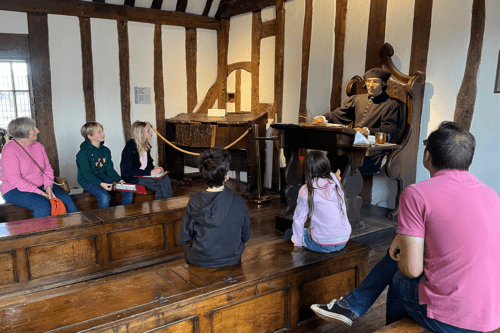 A lesson at Shakespeare’s school

The visit here starts with a guide explaining about the history of the building, visitors watch a short video and then learn about a painting discovered in the Guildhall.

Later, you can dress up in Tudor clothes and learn to write with a quill and ink in a classroom still used by King Edward VI School in Stratford. 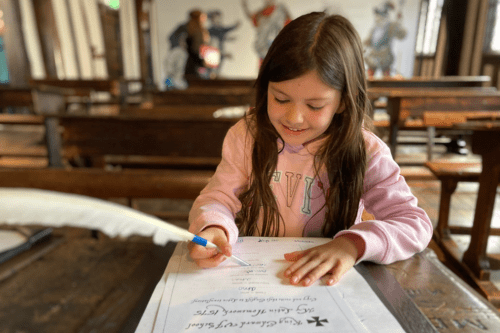 Writing with a quill

Time taken: One to two hours.

At the time it was also known as the Great House as it was the largest in Stratford and the only one with a courtyard.

Sadly, the medieval house was demolished in 1759, today you will find a museum there and an Elizabethan garden. 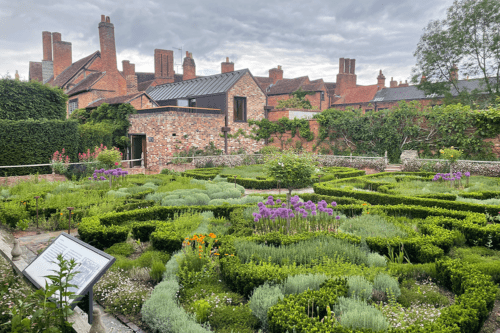 The gardens at Shakespeare’s New Place

The museum has a nice introductory animated video about Shakespeare and his return to Stratford which was interesting.

However the gardens are definitely the best part of New Place, they are beautiful with space to run around and lots of statues and information boards for children to learn about Shakespeare and his plays.

Time taken: Around 45 minutes with children

This lovely place to visit has been open in Stratford since 1985. 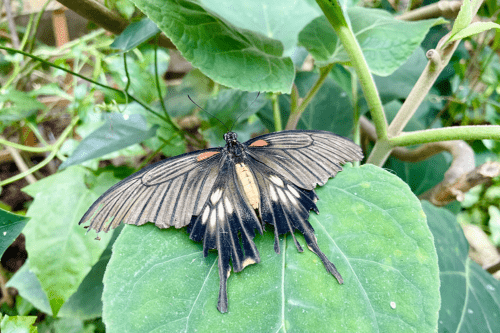 You can leave your coats in a cloakroom before you enter the warm, tropical areas where hundreds of butterflies from all over the world flutter around you.

Try to identify the ones you spot using a picture guide. There is also plenty of information on the butterflies on a big board where you queue to get in.

Tickets are for timed entry to avoid it becoming too crowded inside the butterfly farm.

It isn’t only about butterflies, there is also a great minibeasts area where we saw creatures from ants through to a tarantula and snakes.

And there’s a nice shop and a pretty, small, garden area outside.

Time taken: Allow an hour to explore the farm at a leisurely pace.

The River Avon meanders through Stratford and there are plenty of ways to enjoy it. You can hire your own boat or take a boat trip as we did.

The river cruise with Avon Boating, which has been operating since 1898 – was a pleasant 30-minute journey up and down the river on an Edwardian passenger launch. 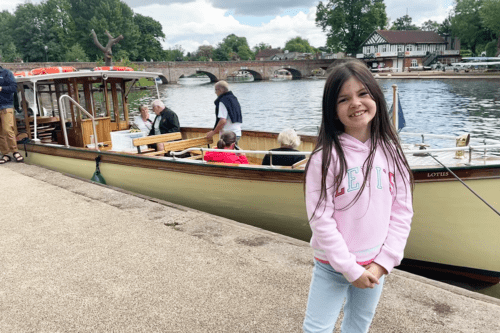 We passed the Royal Shakespeare Theatre, Holy Trinity Church, where Shakespeare is buried and under the 15th century Clopton Bridge.

There is a map on board and a free audio guide you can use along the river.

You can also hire a small boat, a motor boat, an electric launch or Cambridge punts with the company.

MORE:  Knowsley Safari Park - our review and top tips on this popular day out for families near Liverpool

Loaction: We boarded at Bancroft Gardens.

This grade two-listed theatre is the home of the Royal Shakespeare Company and is dedicated to William Shakespeare. 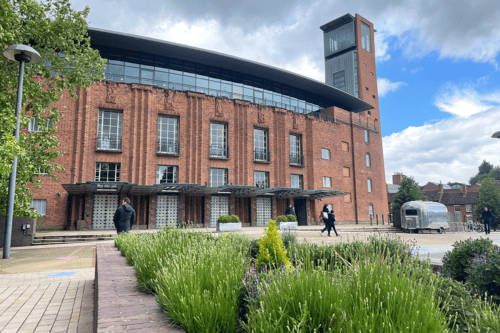 It has over a thousand seats and is located next to the River Avon in the centre of Stratford.

It’s the RSC’s main theatre where they regularly perform Shakespeare’s plays and other works.

Also on the site is the smaller Swan Theatre, a rooftop restaurant, a shop and a cafe.

Have we missed your favourite Stratford attraction? Let us know in the comments.

We used a Shakespeare’s England Explorer Pass which gives you entry to 10 top attractions across Warwickshire including Warwick Castle, Avon Boating and Stratford Butterfly Farm.

Where to stay in Stratford

*We had complimentary entry to the attractions, all views are our own.