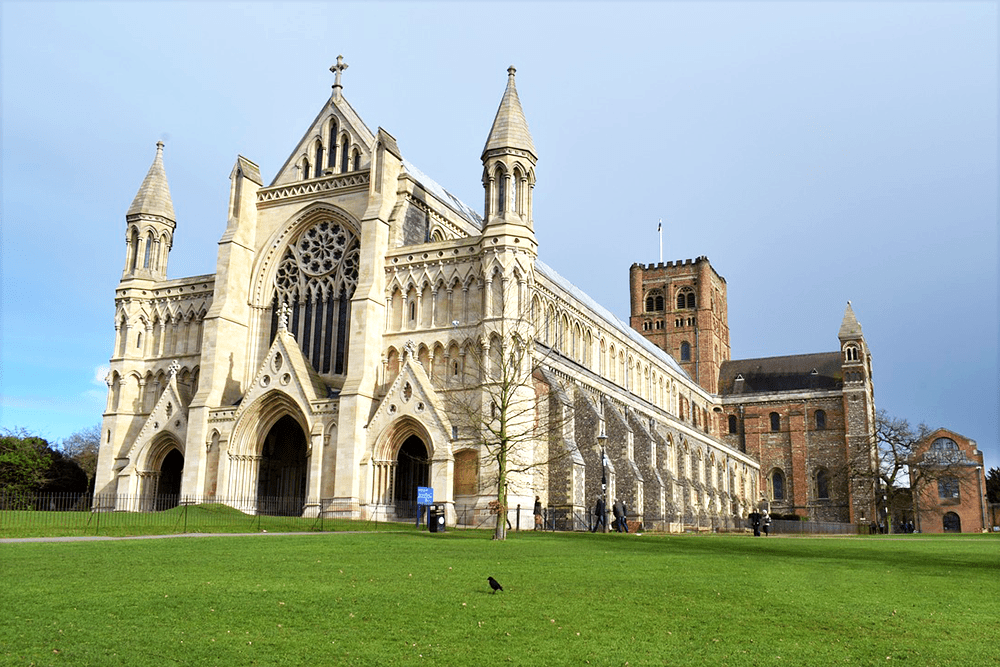 As we climb up and up, twist after twist, turn after turn, the staircase gets narrower and narrower.

The top of the Clock Tower is a particularly tight squeeze, its 600-year-old roof can only take a few visitors at a time – but the view at the summit of the 93 steps is well worth it.

Stretching in front of us is St Albans – a city where the ancient and the modern sit side-by-side.

For example, the Clock Tower was built in 1405, but on the street below, people queue up outside Darlish, the UK’s first Persian ice cream parlour, whose speciality is a deliciously sweet baklava ice cream sandwich.

The city’s park contains both a modern splash pool and Roman remains. And pubs which played host to Oliver Cromwell now serve the latest culinary trends.

And that theme of ancient and modern is clear at our first stop, St Albans Museum and Gallery. 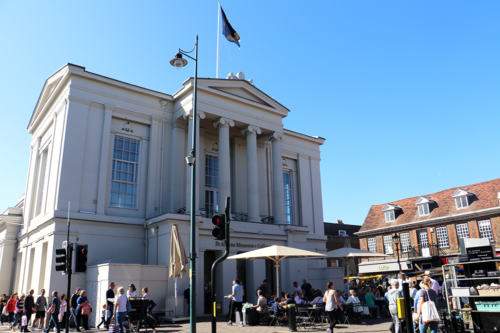 Refurbished in 2018, the city’s main museum contains 2,000 years of history over three floors. Children are given an activity pack and trail to follow around.

You can visit the underground cells which used to be the city’s prison and then climb up into the former courtroom.

While your little ones pretend to be a judge or a villain in the dock, pensioners merrily sip away at cups of tea and tuck into slices of cake. 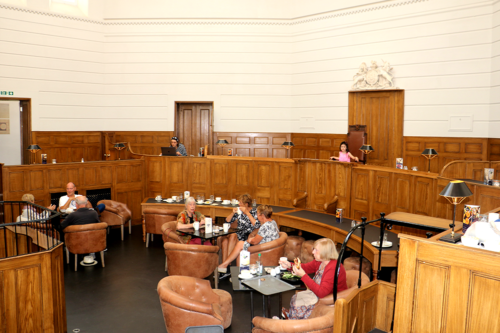 Our little magistrate sentences her big brother to life imprisonment

Upstairs there are more displays of the city’s history and on site is a tasty cafe. You can eat in the old courtroom or on the market square as we did, tucking into large sandwiches, varied salads and a wide range of excellent cakes.

It is worth visiting on market day – Wednesdays and Saturdays between 8.30am and 4.30pm – if you can. There has apparently been a market in the city since the 9th century. 1,100 years on and the stalls are packed, stretching along the high street. You can buy everything from toys, to handbags, to Pakistani or Indonesian street food. It is a vibrant, colourful sight with more than 160 stalls. 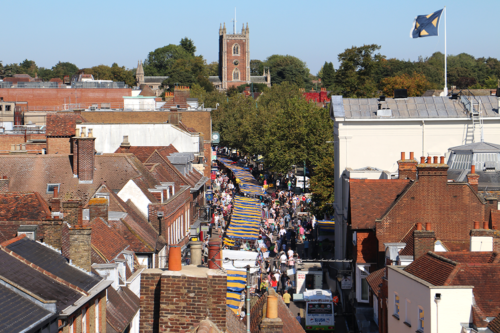 Market day in St Albans, our view from the Clock Tower

At the bottom end of the market and high street is the Clock Tower. The stairs to the top do get very narrow but it is fun to climb and you are rewarded with views across Hertfordshire and even London on a clear day. The friendly volunteers at the bottom of the tower let children help ring the city’s 600-year-old bell, which has been clanging away since the Wars of the Roses. 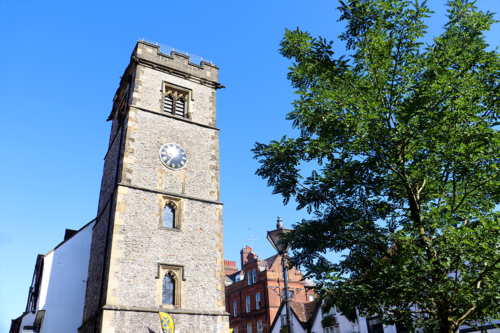 Even older than the clock tower is the building which dominates this city. St Albans Cathedral, known locally as The Abbey, is named after Alban, Britain’s first saint. 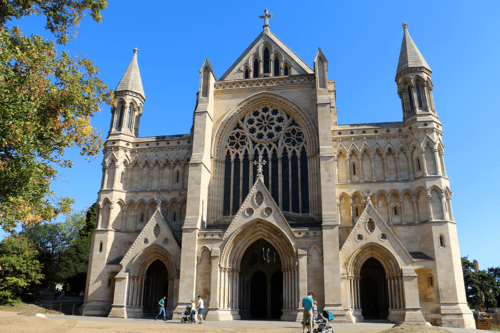 It is a huge building and entry is free. Children can get an activity pack from the new welcome centre, which has a shop, cafe and toilets. The pack contains 12 questions taking you around the cathedral, encouraging youngsters to explore the whole site.

The quiz also explains to them some of the history of this building and the story of how Alban became St Alban and met a grizzly end at the hands of the Romans.

There are also tree trails to explore the cathedral’s gardens, which takes around 45 minutes to complete.

On certain heritage open days there are also graffiti trails where children can hunt for clues on the various etchings visitors have drawn into the stone around the cathedral.

All the trails cost £2 per child and include a badge when successfully completed.

Some churches can feel a little stuffy and unwelcoming to children but this felt like a site where little ones were actively welcomed. 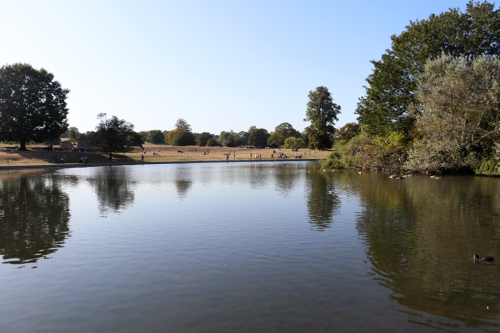 A short walk down the hill from the cathedral brings you to Verulamium Park, a former Roman site.

It is named after the Roman city of Verulamium on which it stands. And there are Roman remains dotted around its 100 acres. It was full of families when we visited, there is lots of space to run around, you can stroll by the lake, feed the ducks and climb trees. There is also a playground, fairly new splash park open during the summer, football goals, cafe and indoor swimming pool.

Verulamium Museum next to the park grounds has artefacts, which explore everyday life in Roman Britain.

St Albans has a wealth of options for eating out with almost every conceivable chain restaurant having an outlet around the city centre. We took a chance on something slightly different. Ye Olde Fighting Cocks is officially Britain’s oldest pub, the octagonal building dates back to the 11th century. 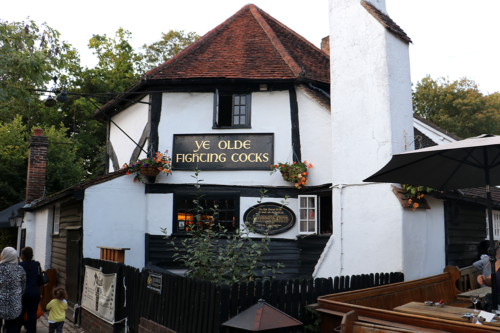 It is well situated near the entrance to Verulamium Park and has a beer garden. Inside, the low ceilings and timber beams make the pub feel medieval. Fortunately, the food is most definitely modern. There are four children’s options (£8 each) including pasta, burgers and sausages. The quality was high, as were the adult meals.

The pub becomes less family-friendly the later into the evening it gets so I would suggest trying it for lunch or an early dinner.

As we stroll back from the pub where Oliver Cromwell once stayed the night, the beautiful cathedral is lit up and it’s easy to see why this is a city is a great place to introduce children to our country’s history.

Where we stayed – St Michael’s Manor 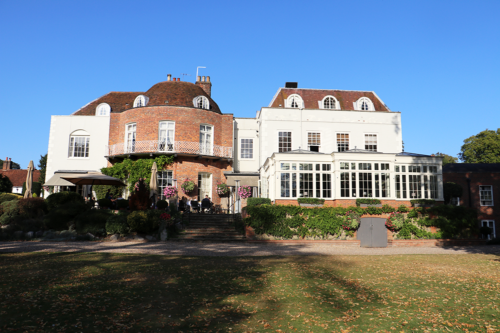 Our hotel, St Michael’s Manor, is next to the park and has a lovely garden of its own – five acres to explore and its own lake.

The hotel’s original building dates from 1500, which practically makes it a modern development in St Albans.

This luxury hotel has excellent family rooms – our suite had two televisions and a huge bathroom. 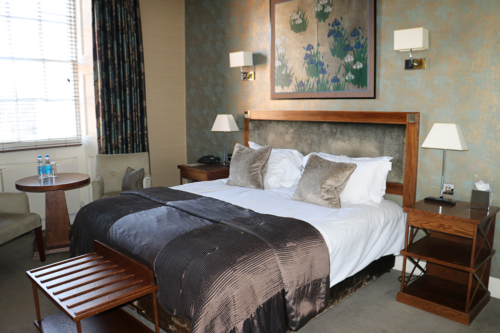 Breakfast is in a beautiful orangery-style restaurant.

It’s well-situated with lots of parking spaces, so we could walk to and from the city centre, read our full hotel review with pictures and video here: Review: St Michael’s Manor Hotel in St Albans 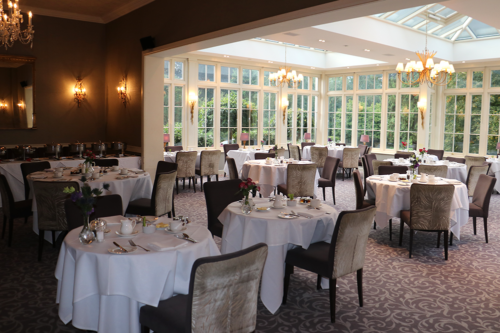 Disclaimer – Our hotel, food and attractions were provided to us in exchange for this review. All views are our own.