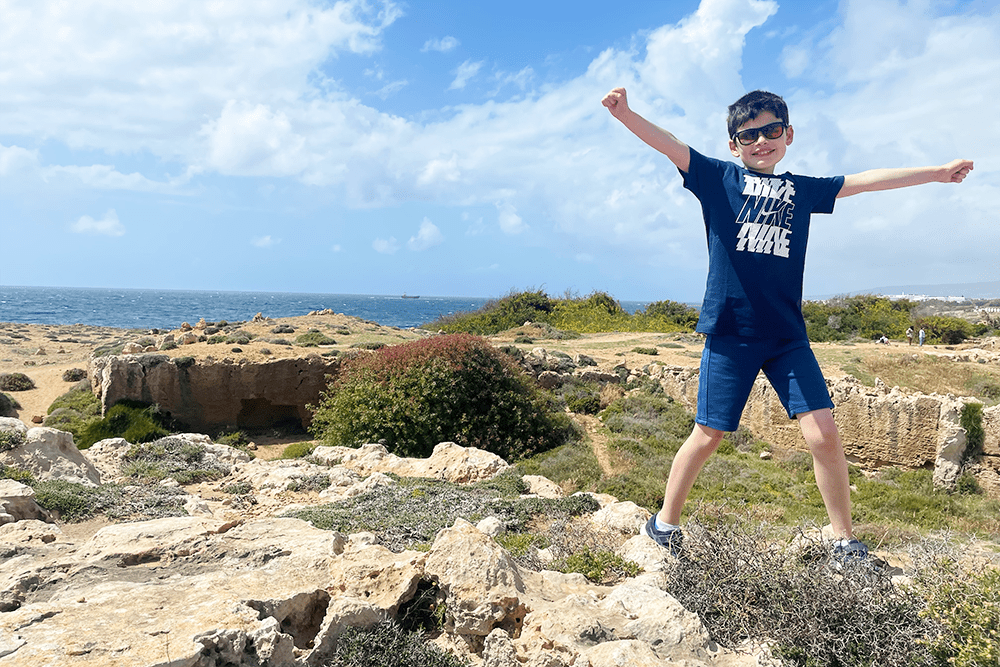 Ten places to take your children around Pafos/Paphos in Cyprus

It may be slightly further on a plane than other European hotspots, but Cyprus is worth the four-and-a-half-hour flight from the UK for the year-round sunshine.

Other pluses make it easy to travel there with children – it is set up for families, English is widely spoken, the food is great and if you are nervous of driving abroad – well they drive on the left.

Once you’ve found a good base – we stayed at the sumptuous Columbia Bay Resort in Pissouri – it’s time to decide where else you want to explore.

There are waterparks, beaches, historical sites and more, including:

Our children loved exploring this World Heritage Site next to the sea. 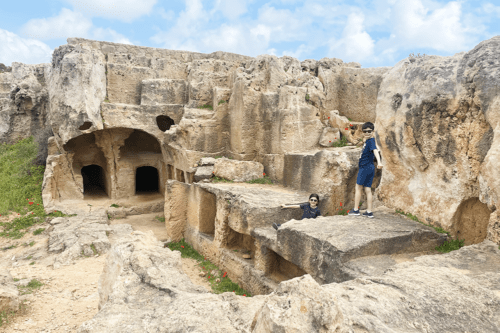 There are seven excavated tombs, carved out of rock and spread out over a big site.

Despite the name, the chambers were not actually occupied by royalty but high-ranking officials and aristocracy of the Hellenistic and Roman periods.

Top tip: Our children loved climbing here but there are some hidden drops so be very careful with little ones. 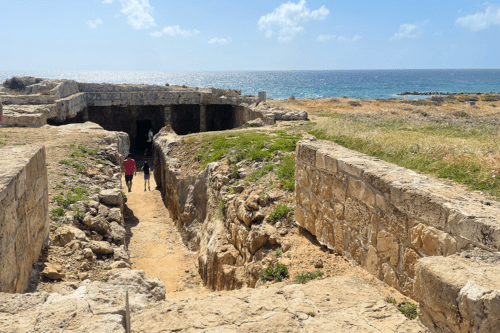 Where is it: North of Pafos/Paphos harbour

This site on the south coast of Cyprus is, according to Greek mythology, the birthplace of Aphrodite, the goddess of love. 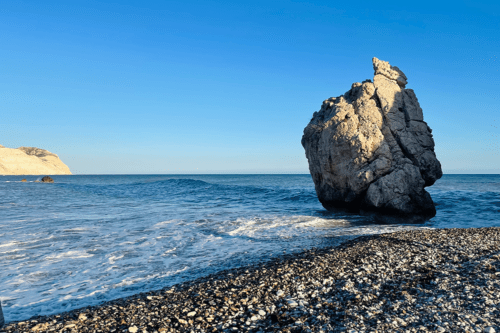 We stopped off here, where she is said to have emerged from the sea, at sunset on our way back to the airport.

It’s a pebbly beach with big rock formations coming out of the water – one of them known as Aphrodite’s Rock.

Local legend says that anyone who swims around the rock will be blessed with eternal beauty.

Top tip: If you park in the car park opposite, you don’t need to cross the road, there is a passage under the road on to the beach. There is also a shop and cafe with toilets on the car park.

Where is it: On the main coastal road between Pafos/Paphos and Limassol 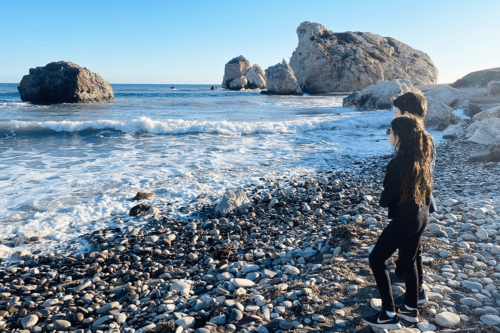 This is the biggest zoo in Cyprus with over 500 mammals from all over the world, ranging in size from guinea pigs to giraffes. 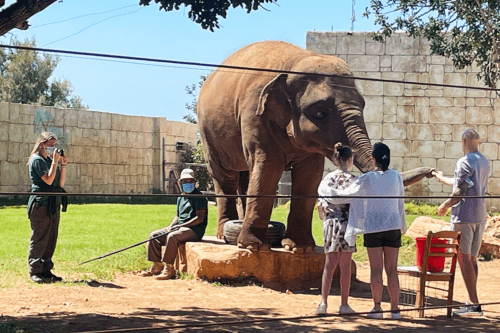 There are also a thousand birds including birds of prey, penguins and parrots along with reptiles like crocodiles, snakes and giant tortoises.

And there’s a playground, a shop and places to eat.

Top tip: Our favourite part was the parrot and owl show.

MORE:  The top 20 family holiday destinations for 2019 have been revealed

Where is it: About 20 minutes north of Pafos/Paphos past the resort of Coral Bay.

It’s nice to have a walk around the harbour area to soak up the atmosphere, even if you are just passing through on your way to somewhere else.

There are restaurants and cafes, shops and boats to watch, a promenade to walk along and a small castle at one end.

Some boat trips leave from here too. 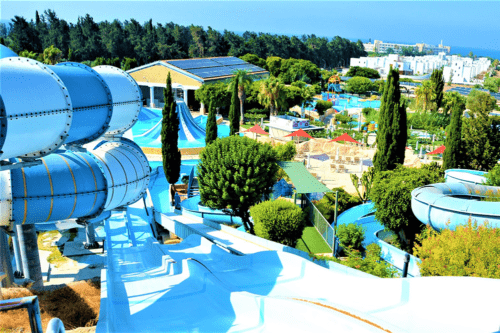 We ran out of time to try it much to our daughter’s disappointment, but it sounds amazing and includes high speed water rides, a lazy river and a wave pool.

Where is it: In Kato Paphos on the coastal road.

A boat trip is a great way to see the island and there are various options available.

Paphos Sea Cruises is one of the companies who offer excursions.

They have a pirate-themed one which children might enjoy called Pirates Adventure – Jolly Roger II, which includes a pirate show, lunch, face painting and more.

We enjoyed looking around the archaeological remains of the city of Kourion, which was destroyed in an earthquake in 365 AD. 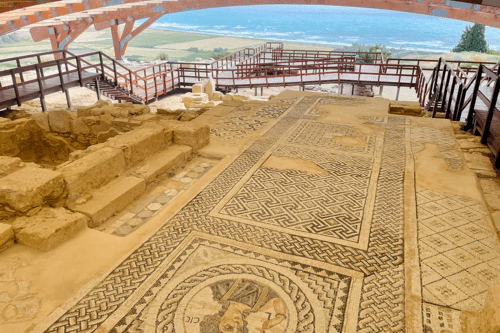 It includes mosaic floors and a Roman theatre which has been restored and is used over the summer for performances.

Where is it: West of Lemesos/Limassol on the road to Pafos/Paphos.

Of course, a family holiday in Cyprus would not be complete without trying out the beaches.

And this, the third-largest Mediterranean island, has loads of Blue Flag beaches.

There are pebbly and sandy ones – one of the best being Coral Bay. 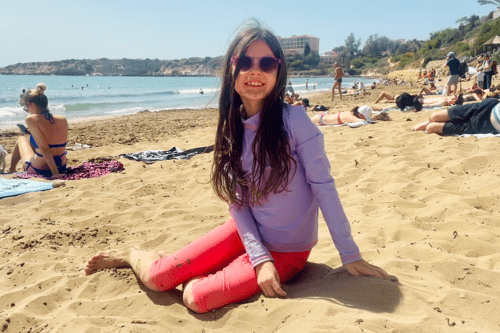 This lovely, long, white-sand beach is surrounded by cliffs so the waves don’t get too big.

There are umbrellas and sun loungers over the summer months but not when we went and we could have done with somewhere to shade from the sun.

It was also fairly busy, unlike the pebbly beach, our hotel was on. 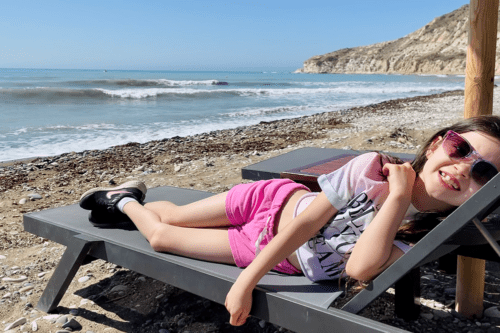 The beach at Columbia Beach Resort

This dramatic gorge (a deep valley between hills or mountains) was created by a stream flowing over limestone for thousands of years. 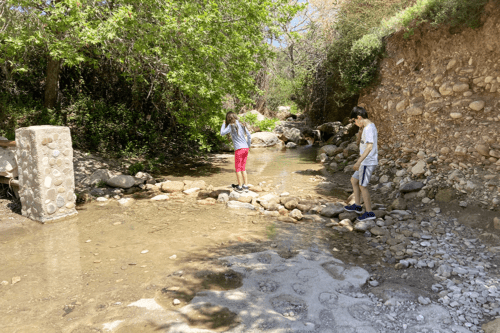 It is quite a challenging walk better suited to older, fitter children.

We tried it on a hot day which made it harder so try to go when it’s cooler.

The mountain roads to get to it are not great – several people arrived in hired jeeps – we parked quite far away but this made for a longer walk.

MORE:  Chocolate, Harry Potter, trains and Vikings - all the ingredients for a family trip to York

Top tip: There are slippery rocks, so make sure you wear good footwear – not sandals or flip-flops – and look out for some steep drops.

Where is it: West of Pafos/Paphs

We made a flying visit to this 700-year-old castle, birthplace of the world’s oldest wine, Commandaria , said to have been drunk by Richard the Lionheart at his wedding. 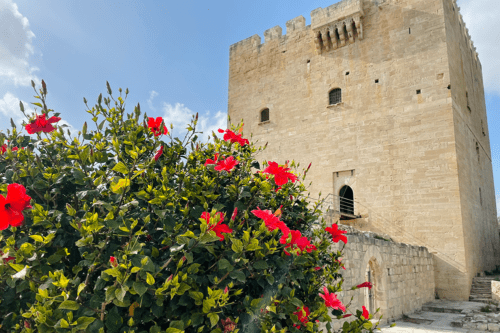 It only takes around half an hour to look around but the entrance fee is low and it’s worth a stop-off on your way to somewhere else.

The rooms are empty but when you climb the steps, there is a great view from the top.

Where is it: Kolossi, 14km west of Lemesos on the road towards Pafos (Paphos).

Have we missed your favourite family attraction?

We would love to know of anywhere you recommend, please comment below.