Review: A family holiday to beautiful Corsica at May half-term with Eurocamp 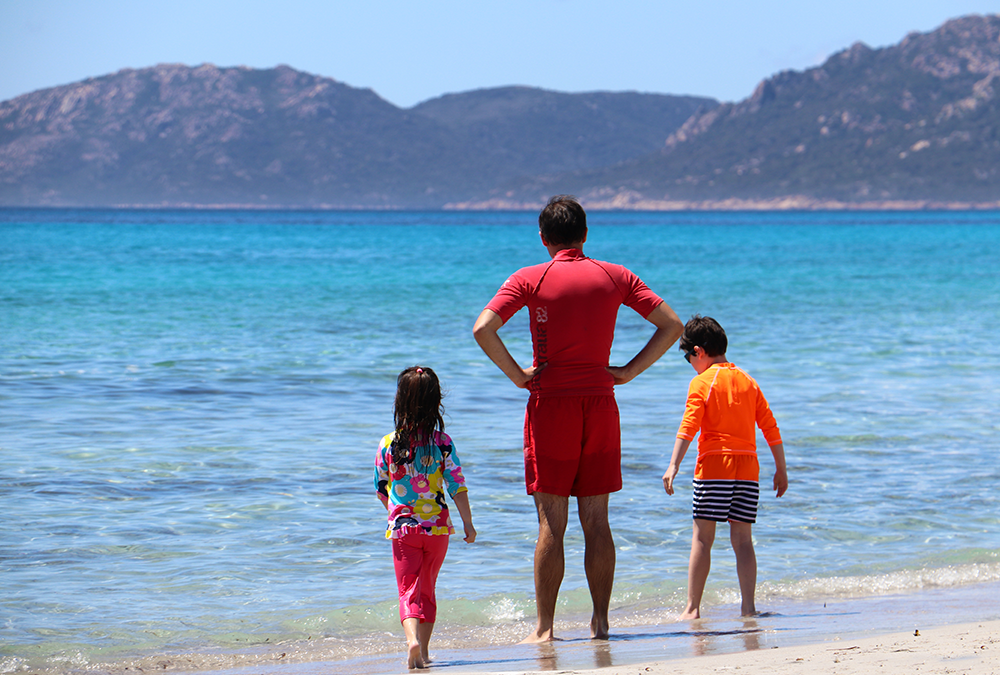 We have just arrived on a gorgeous, sunny beach, framed at each corner by pink and orange rocks.

I lay out a towel, get out the bucket and spades and our children squeal with delight as they take to the clear blue waters of the Mediterranean.

Minutes later we are scurrying to our car as a thick, black cloud descends down from the improbably steep mountains towards us and the heavens open.

This is Corsica: a land of extremes. Bright sunshine then brutal showers. Shallow bays and steep mountain passes. French-owned with an Italian influence.

An abstract concept which, for a family, boils down to croissants for breakfast and pizza for dinner.

And our week is a tale of two very different Eurocamp holiday parks (read our full comparison here).

Marina D’Erba Rossa is our first stop. On the east coast, near the town of Ghisonaccia, an hour’s drive from Bastia Airport. 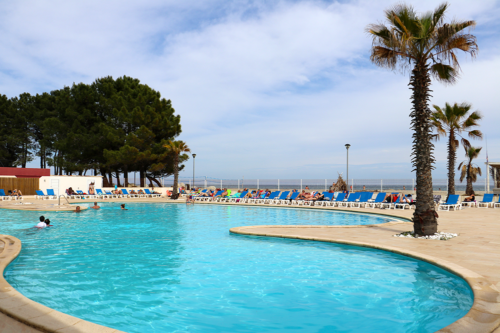 “Mummy, an ostrich woke me up and now I’ve spotted a llama”.

We are next to the small animal park on this large site. Bulls, kangaroos and chickens alongside the holidaymakers who have arrived here from across Europe.

MORE:  The Buxton Crescent REVIEW and GUIDE – we discover if this luxurious spa hotel is popular with children

The holiday park is a little tired in places and our mobile home isn’t the newest but we can overlook that as there is so much for children to do. 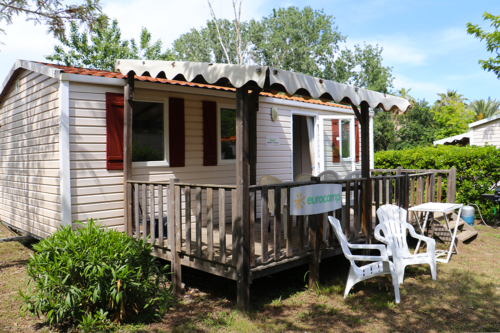 For a start, it’s on a big beach with inviting waves. There’s a great pool, next to the beach. 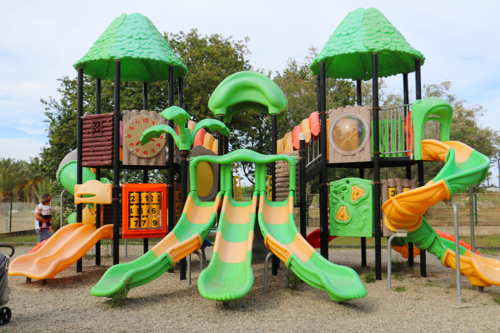 A small shop on the site sells essentials including fresh croissants and baguettes in the morning and at night you can tuck into very tasty pizza at the on-site restaurant.

Ghisonaccia is a fairly non-descript Corsican town but has all the facilities you need. Nearby Aleria has some of the island’s history on display at its museum.

The fact that Marina D’Erba Rossa is on a lovely beach was the biggest draw for us. But this island, birthplace of Napoleon, is much more than just a beach holiday.

You have to head inland. Onwards and upwards into the mountains. 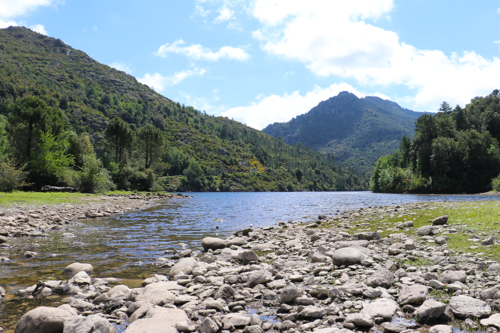 And it’s at the start of one of these roads we find our second campsite, Sole di Sari. Keep reading for all the details.

Outside the town of Solenzara, the small site Sole di Sara campsite is fresh and modern. 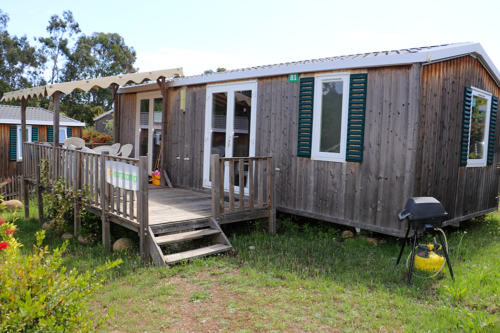 The mobile home is nearly new, nestled into the hillside overlooking a stunning backdrop of mountain peaks and a gentle river. 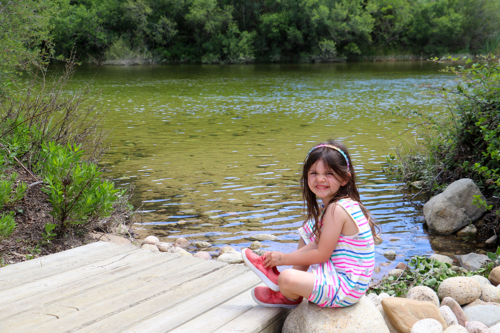 The river at Sole di Sari

And the river isn’t just for looking at, it’s for swimming in too. The water is even colder than the site’s clean but small pool but is well worth exploring. 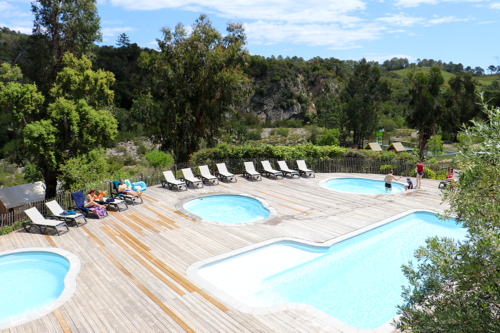 There’s also a play area with swings and slides, a modern bar and restaurant, boules, table tennis and a basketball court. 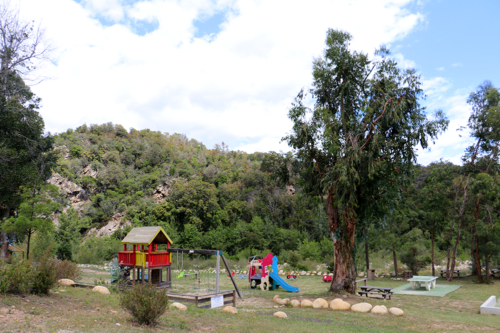 From Sole di Sari, you can get to the nearest beach by car in five minutes or head up the mountain road that the park sits on.

Just watch out for the wild bulls! One comes charging down the road and then chases us on our way up the snaking route to the Col de Bavella.

A 20-minute slow drive rewards with astonishing views across the mountainous valley. We stop about two-thirds of the way up after losing the bull, where there is a short but spectacular walk. 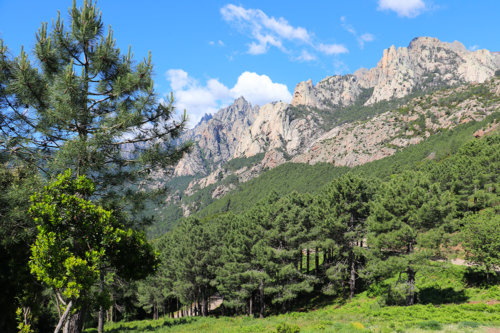 Adventurous families with older children can go canyoning and hiking to hidden waterfalls.

MORE:  Four holiday in Dorset: Following in the footsteps of the Famous Five

There is also a zip wire and treetop rope courses including one for youngsters (but check for opening times, they are closed when we go).

Children will also enjoy the rocky streams and turquoise coves lower down the mountain road.

Back at sea level we sample an abundance of colourful beaches on this stretch of coastline. Highlights near Solenzara are Scaffa Rossa, Fautea and Canella. 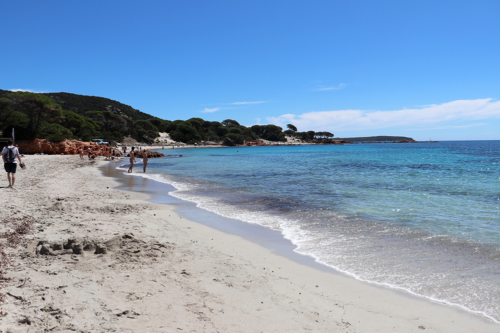 Further afield we combine a visit to the wealthy walled town of Porto Vecchio and its yacht-filled marina, with a trip to Corsica’s most famous beach Palombaggia.

Shallow waters, soft sand and a wonderful view along the coast draws thousands to this beach, which means sharing the sand with plenty of other people, something we haven’t had to do elsewhere.

Peaceful, picturesque places aren’t hard to find whether you choose the mountains or the beaches on this island of contrasts.

Corsica is a French island in the Mediterranean, north of Sardinia. It is west of Italy and southeast of France.

Yes. And families in Corsca can combine a beach holiday with adventure in the mountains and rivers further inland.

English isn’t widely spoken everywhere so you do need to be a bit more adventurous than, say, heading to Spain but that’s all part of the fun.

MORE:  The Costa del Sol in two halves - can a mix of Malaga and Estepona make for a fantastic family holiday?

Is it easy to get to Corsica?

It’s short two-hour flight from the UK to Bastia in the north and Figari in the south.

When is the best time to travel?

Between April and October. We went at May half-term which was nice and quiet.

Have you been to Corsica? Where did you stay?

Eurocamp has a choice of camping holidays in more than 175 parks across France, Spain, Italy and elsewhere in Europe.