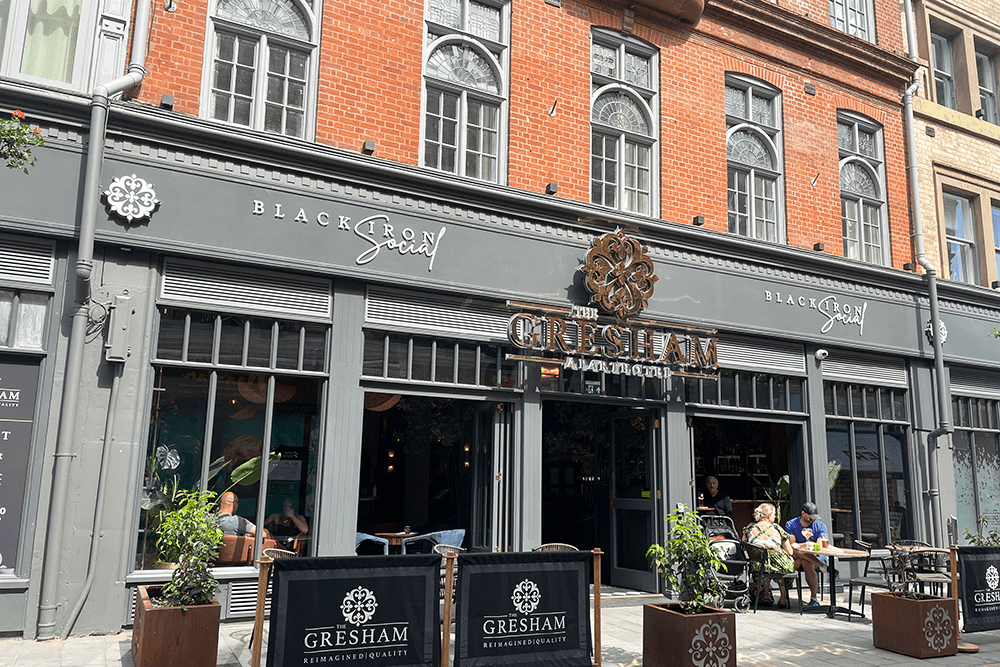 This is an aparthotel (apartments with a hotel booking system), which opened at the end of 2021 following a £17 million refurbishment.

It’s in an iconic building which was once a department store, made up of several buildings designed in the 1800.

There are 121 apartments, a restaurant and bar, a gym and conference facilities.

It’s in Leicester city centre, a five-minute walk from the cathedral.

Rooms range from a studio through to a two-bedroom apartment and a sky room with city views. 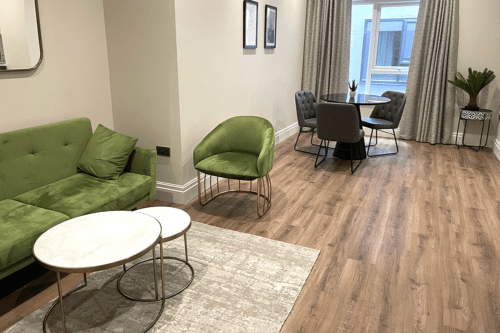 They all have a kitchenette, dining area and lounge area with television.

The one we stayed in was modern and clean with two bedrooms and two bathrooms. It was one of the apartments on the inside of the building so only had one window, but the lights are bright. 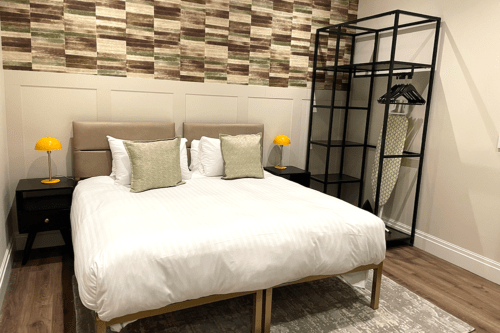 One of the bedrooms in our apartment

Is it child friendly?

It is not in the most salubrious of areas, but once inside, the children loved exploring the apartment. We entered through one of the bedrooms and gradually discovered more and more rooms, there was definitely plenty of space.

Another bonus was the smart tvs in both rooms which enabled them to catch up with YouTube and Disney+. 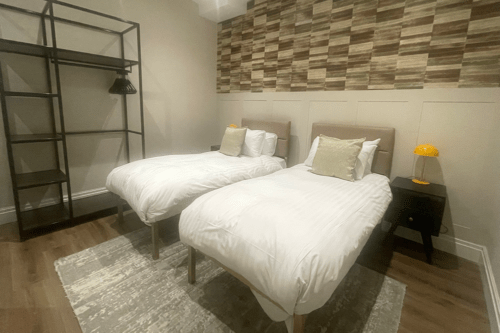 Their bedroom was bright and spacious and it’s great having access to kitchen facilities, a fridge and dining table.

The lounge area was big enough for us all to sit down and enjoy a movie although the sofa could have been comfier. 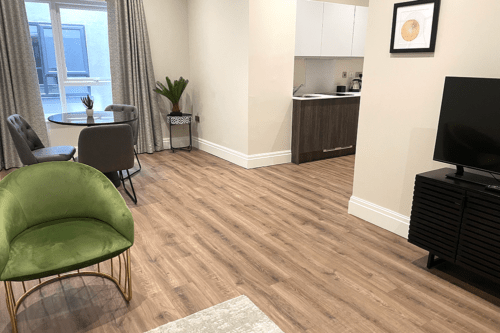 There is a restaurant and bar on the ground floor called Black Iron Social which serves breakfast, brunch, bar snacks and dinner and seems really popular. 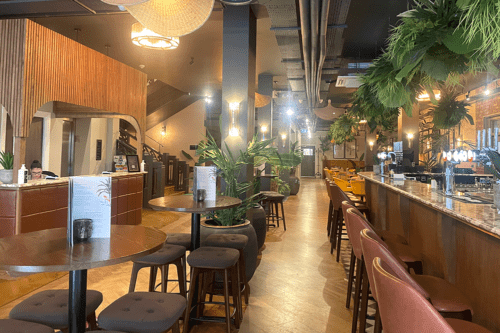 Plus there’s a Tesco Express around the corner if you want to eat in.

*The rooms are modern, fresh and clean. The size is great with lots of space to relax in.

*The modern facilities are a big bonus

*It’s a good central location in Leicester, you can walk to all the major attractions in the city centre.

*Make sure to ask for a room on the outside with windows, if you want them.

*It is on a pedestrianised street so if you have heavy luggage, get one person to drop the other off nearby before going to park your car.

Leicester has some great family attractions, including the National Space Centre and the Richard III Centre, read our full guide to places to go in the city here.

Parking: The hotel does not have its own car park. There are car parks within a short walking distance, we used Newarke Street car park, which is about a 2/3 minute walk.

We had a complimentary stay, all views are our own. 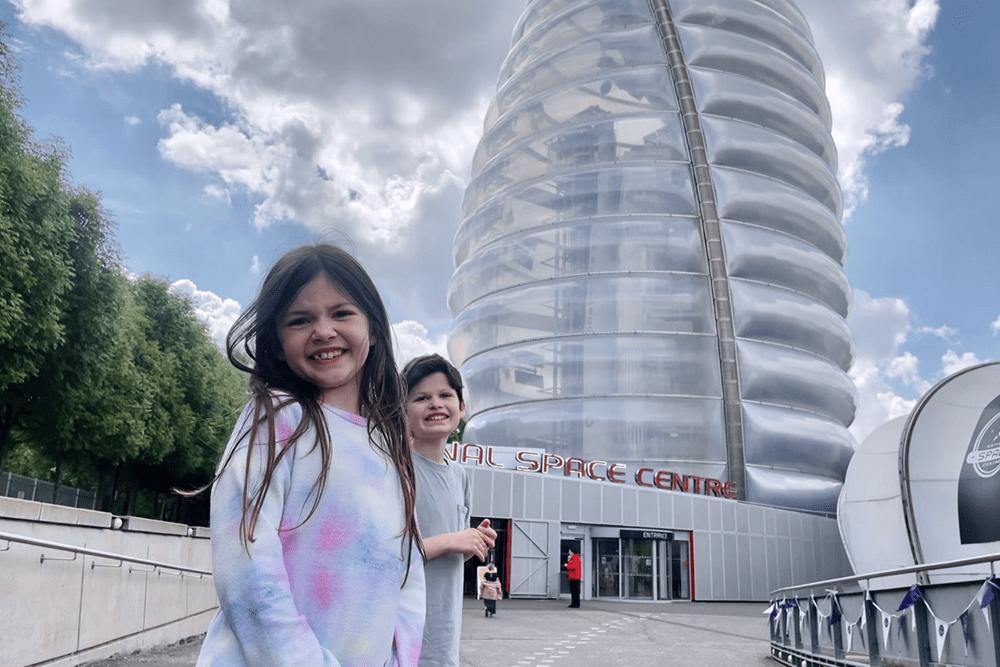 The best things to do with children in Leicester

The top family attractions in Leicester

Leicester is a city in the East Midlands area of England with plenty for families to do, here is our guide to the best attractions to visit with children.

The National Space Station is arguably the main family attraction in Leicester. 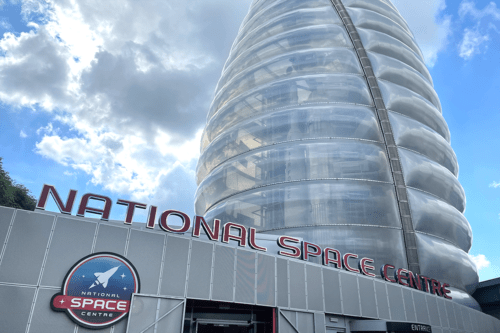 It’s been open for around 20 years and although the outside looks a little dated now, inside is a fresh and modern museum with plenty of hands-on attractions.

There’s a large ground floor area which explains all about the galaxy, with plenty of interactive elements.

You can also see space suits worn by the likes of Buzz Aldrin and Tim Peake. 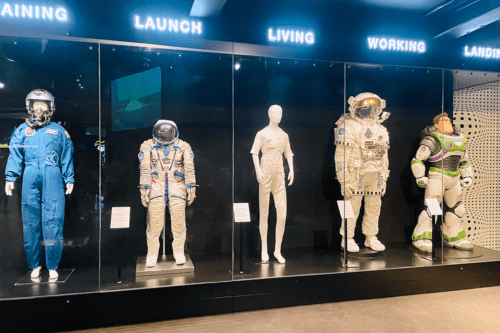 There is a planetarium showing a film narrated by Ewan Macgregor which lasts around 20 minutes and explains the life of an astronaut.

You book a time slot and sit watching a domed-shaped projection screen above and around you – we made the mistake of sitting at the front so I would suggest sitting towards the back.

It feels as if you are moving around space which can be a bit disorientating plus it’s worth noting that it includes some medical details about the human body and sickness.

When getting to floors two, three and four you pass two rockets which are inside the centre.

The second floor showcases the UK’s contribution to the space race. There is a good video about some of the country’s pioneers and a nice interactive screen where children can design their own rocket  and then see it fire into space.

Floors three and four are all about the Space Race between the Soviet Union and USA.

The third floor talks about the Russians’ role and you can take control of a capsule similar to Yuri Gagarin’s – the first man in space.

The top floor explains the timeline of the moon landings, telling the story of Apollo 11 and subsequent flights. 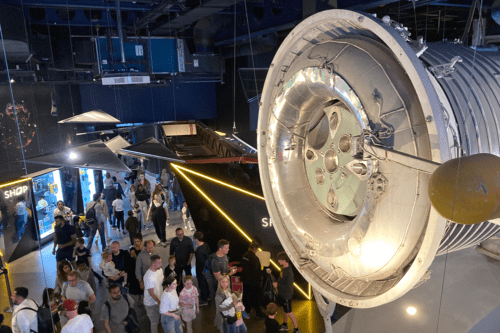 The timeline is clear and simple for children and they can feel a replica of the moon’s surface, as well as having a look at tiny piece of the moon too.

Suitable age: Best for children aged eight and above as some of the exhibits are quite detailed.

Food: There are cafes and snacks available on the ground floor. There was an ice cream van outside when we visited too plus picnic benches outside.

Parking: There are two large car parks with tickets costing £3 for the whole day.

Where is it: Two miles north of Leicester City Centre, off the A6 between Leicester’s inner and outer ring roads.

If you are parked at the National Space Centre, you can also visit Abbey Pumping Station next door. 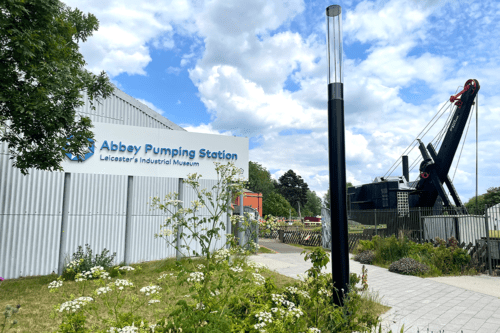 A museum based on sewage doesn’t sound too exciting but this free museum has a good playground, old diggers and cranes, a narrow gauge railway which runs occasionally and a small garden.

Older visitors may like the museum’s collection of industrial, technological and scientific items relating to Leicester.

I wouldn’t go especially to visit but it is worth stopping by if you are already at the space centre. 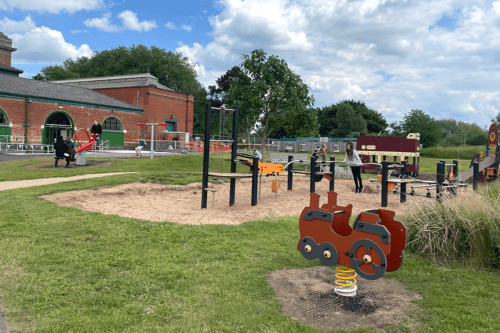 Parking: At the National Space Centre next door, cost £3.

The discovery of Richard III’s remains under a Leicester car park in 2014, led to this excellent new museum.

Set over two floors, the first explains the story of Richard and the Wars of the Roses. It uses videos, timelines and interactive screens to set out how Richard became king between 1483 and 1485 and how he was killed at the Battle of Bosworth. 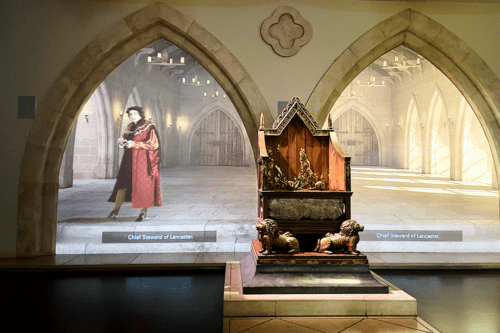 The second floor details how Richard’s remains were discovered.

A group of dedicated historians and enthusiasts thought he may be buried under a city car park. A huge dig proved them right and this exhibition shows how DNA testing and various techniques proved it was the king.

It is mostly aimed at adults but there is a good dressing up area where children can wear Tudor clothes. 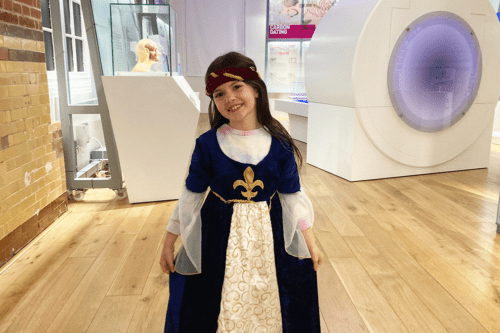 Dressing up in Tudor clothes

The centre also gives children an activity sheet on entry with a quiz, colouring and a wordsearch to do around the museum.

The end of the museum is a simple room with an area of glass floor through which you can see where Richard’s remains were discovered.

The room has a friendly member of staff on hand to answer questions and children will enjoy walking over the glass to look closely at the site.

Parking:  There is no parking and the area around is pedestrianised. Long-stay nearby car parks include St Nicholas Circle NCP (next to the Holiday Inn, postcode LE1 4LF) and at the Highcross Shopping Centre (accessible from Vaughan Way, postcode LE1 4QJ).

Where is it: In the heart of the city centre, next to Leicester Cathedral.

Leicester Museum is free to enter and has lots of sections including Ancient Egypt, dinosaurs, wild space, Leicester stories, the Victorian Art Gallery, arts and crafts, Picasso Ceramics along with the Attenborough Collection and Leicester’s German Expressionism collection. 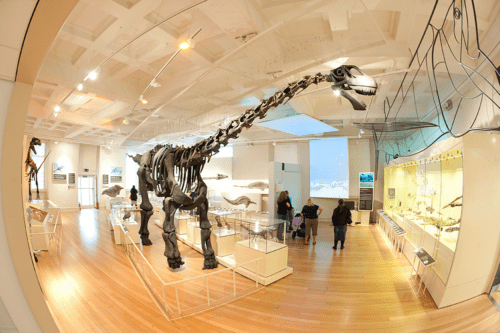 It also hosts lots of temporary exhibitions and has activities including talks and lunchtime concerts, plus there is a gift shop.

Food: There is a museum cafe.

Where is it: In the south of Leicester city centre.

This is an indoor adventure park inspired by the ITV hit programme Ninja Warrior UK. 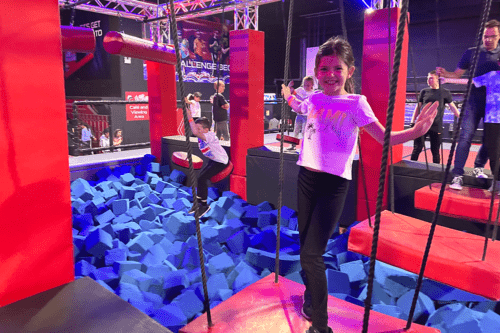 It is not a set course, you can have a go at any section you like.

Children and adults can all take part and there’s a separate smaller area for under-fives.

Participants have coloured wristbands to show which hour-long time slot they are in – if doing two hours you get two.

Everyone waits in the café area for a quick safety briefing before you can start.

What to wear: Trainers have to be worn around the course except on the inflatable section where provided Ninja socks must be worn. Jeans can’t be worn – only appropriate attire for exercise.

Food: There is a good-size cafe area serving food and drinks.

Parking: There is free parking outside in the retail park.

Where is it: It is on St George’s Retails Park in Leicester. 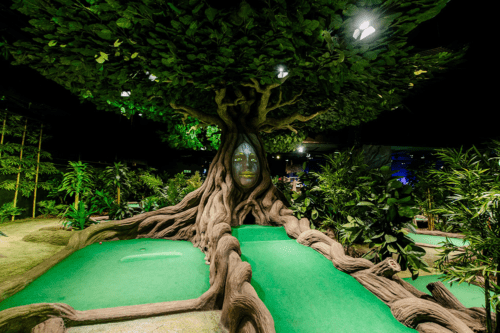 One is called Tackle the Tropical Trail which has a rainforest theme.

The other, called Ancient Explorer, is in a temple setting.

There is also a bonus hole – the 19th hole – where everyone can try to get a hole in one for the chance to win a free round of golf.

Food: There is a pizza restaurant, cafe and even a cocktail bar. Picnics are not allowed.

Where is it: At the High cross shopping centre in Leicester.

For more ideas go to the Visit Leicester website.

Have we missed your favourite attraction in Leicester? Let us know in the comments!

There are plenty of places to stay in Leicester, we stayed in a good central spot at the Gresham Aparthotel, read our review and guide.