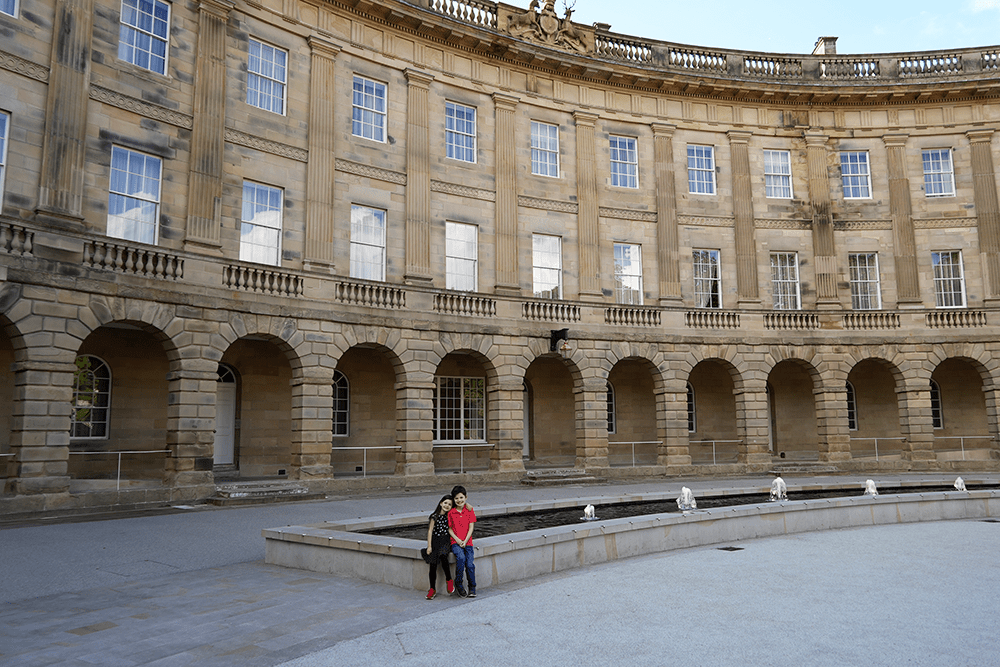 The Buxton Crescent is a beautiful hotel in the heart of a Peak District town which for centuries has been famed for the healing properties of its spa waters.

This iconic, curved, Georgian building, started out as two grand hotels. And now, a 17-year project has restored it to this luxurious hotel and contemporary spa which sources the natural spring water from beneath it.

Visitors are travelling from all over to stay here, but is it suitable for children? We take our two, to find out what it can offer for youngsters.

It is in lovely Buxton in the Derbyshire Peak District, in a brilliant, central position opposite the Pavilion Gardens.

The Buxton Crescent is a five-star spa hotel which opened in 2020 following a £70 million restoration.

It has 81 rooms and a big thermal spa and is run by Ensana Hotels.

Buxton first became a spa resort when the Romans discovered warm, bubbling springs underneath what is now the hotel and settled in the area in around 78AD.

In 1789, the Crescent was built by the Fifth Duke of Devonshire to establish Buxton as a Georgian spa town.

It was originally two hotels, vsited by spa seekers who travelled from all over to bathe in Buxton’s thermal waters.

MORE:  The 10 top family days out in Shropshire

The building was later used for other purposes but by 1992 was derelict.

It was reborn following a huge renovation and the Buxton Crescent Health Spa Hotel opened in October, 2020. 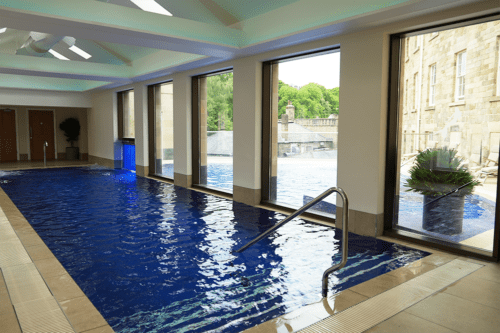 Is it family friendly?

The hotel’s main market is adults including couples, older families and friends but it is surprisingly child-friendly and our two absolutely loved it.

They adored our suite (see accommodation below), the food and especially the indoor to outdoor rooftop swimming pool.

Plus, the location opposite the park was a huge bonus with its two play areas, boating lake, ice creams and mini train.

And there are so many amazing things to do in the surrounding area (more below).

We stayed in a junior suite which can hold two adults and two children. We parents slept in the main bedroom in a sumptuously comfortable four-poster bed beneath a magnificent chandelier. 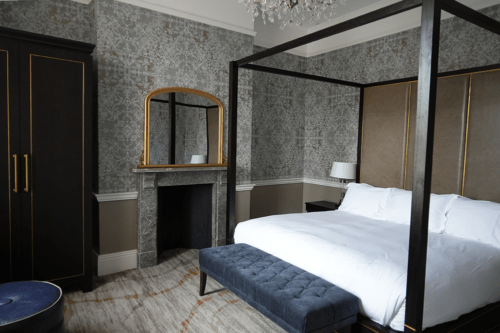 Our bedroom in a junior suite

The children were in the lounge area where a sofa bed had been converted into a small double. They loved having their own room (and tv opposite the bed)! 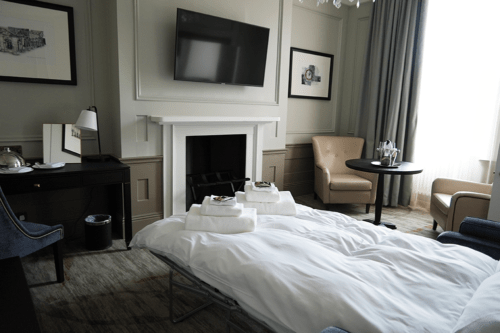 The lounge became the children’s room

There was a separate bathroom with the biggest overhead shower head I’ve ever seen and a freestanding bath outside the bathroom within the area between the two bedrooms. 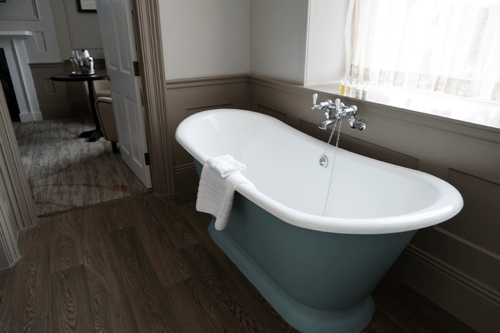 The restaurant is lovely, it’s elegant and serene so keep your fingers crossed for well-behaved children but it’s big enough to be able to relax.

There is a children’s menu with a great choice of food for younger diners. The pasta and meatballs went down well with our two as did waiter Joe’s napkin tricks. 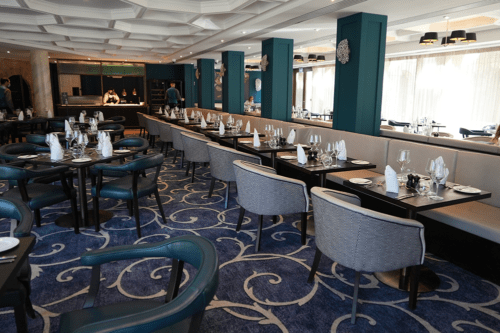 Our meals were so tasty and there was a great choice of wine.

Breakfast was equally delicious, there was a good choice of cereals and lovely pastries, plus pancakes and cooked breakfasts.

There is also a Spa Cafe serving lighter meals and desserts with indoor and outdoor seating.

The rooftop swimming pool was the best I have ever been in, thanks to its warm temperature, which meant that for the first time ever I was able to get straight in instead of very slowly, while shivering. There was also the novelty of being able to swim from inside to outside and vice versa.

I know it’s just water, but the water here tastes so nice, we all drank a lot more than we usually would in the restaurant.

The town’s drinking well, St Ann’s Well, is opposite the hotel and you can fill up your own bottles here but the hotel is supplied directly.

MORE:  A hotel between Portsmouth and Southampton proves a hit for all the family

Buxton Mineral Water is still bottled here and sold around the world.

Buxton is one of only two Roman spa towns in England – the other being Bath.

Famous faces who have travelled here include Mary Queen of Scots who came to ‘take the water’ in Buxton to treat her rheumatism.

Visitors to the hotel spa now find a relaxing, contemporary space where they can also bathe in the town’s water – it flows chemically untreated into a thermal pool surrounded by wall tiles dating back to 1924 and covered with a stained glass canopy.

Use of the spa is included with all stays and also includes a relaxation pool, spa baths, three saunas, two steam rooms, a gym, a salt cave, two relaxation pools and an ice fountain.

The spa is not for children so we parents took turns individually to enjoy it.

Treatments from the spa menu cost extra and include traditional beauty therapies along with wellness and holistic treatments.

Modelled on the Royal Crescent in Bath, this fine example of Georgian architecture feels wonderfully impressive as you arrive.

The staff were so friendly and helpful and went out of their way to assist and chat and make our stay extra special.

MORE:  A holiday park in Holland next to the 'Dutch desert' - we review Duinhoeve and give our top tips for a family holiday there with children

The Peak District is the country’s oldest National Park and there are loads of great family walks to enjoy among its rolling hills.

There are also lots of attractions that children will love. We visited:

A two million-year-old limestone cave with fabulous formations, read our review and guide to it here. 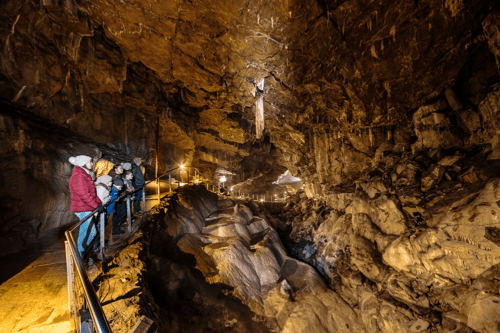 A lovely zoo where you can walk among some of the animals. It also has play areas, read our review and guide here. 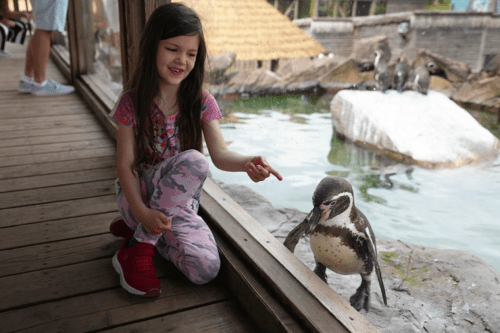 *We also climbed Shutlingsloe Hill, known as the Matterhorn of Cheshire.

The third highest peak in the county has a distinctive profile. It’s very steep and rocky towards the top. 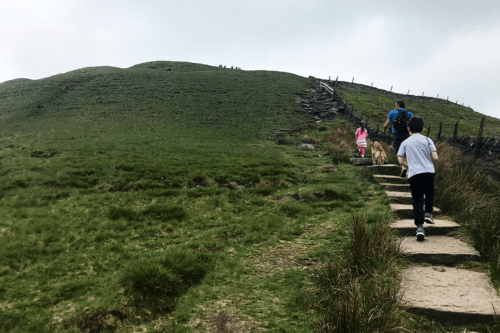 We had an amazing time at the Buxton Crescent Hotel and we all would love to return, it’s a perfect destination for all ages to relax and enjoy the luxurious surroundings and beautiful Peak District.

(We received a complimentary stay at the hotel for the purpose of this review, all views are our own).

We have just stayed.Spa lovely but sadly very busy,. Our room was very nice and spacious, as was the bathroom. Restaurant was not good. My meal was cold I wasn’t offered anything thing else. When I asked to see a manager, I mentioned that I was hungry. Still wasn’t offered anything else.So I asked her could I have some crisps and nuts. That was my meal. The Saviongn Blanc was not cold. I was told we didn’t have any in the fridge but they could pop it in for a few minutes. At breakfast our milk was off. We spoke… Read more »

Spa facilities at Buxton Crescent are first rate, very relaxing/invigorating. Have not tried the extra therapies and treatments, but the baths, steam rooms and saunas are great. One of the pools is filled with Buxton spring water, rich in minerals and very buoyant. The Georgian Crescent is in an historic town, which Mary Queen of Scots visited for her health. It also has beautiful gardens and a lovely Edwardian theatre, so this is the perfect place for a wonderful weekend of relaxation and recreation.