The 8 BEST beaches in and around Abersoch in north Wales 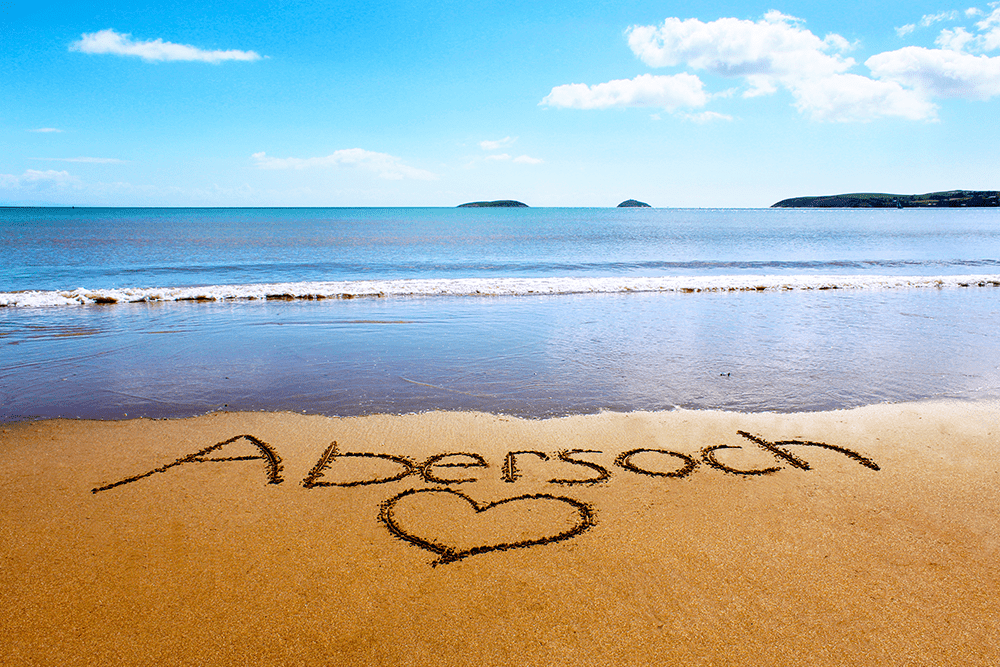 Families staying in Abersoch on the Llŷn Peninsula are spoilt for choice when it comes to fabulous beaches.

It’s one of the reasons that people with children return to the area year after year.

Our two children adore the beaches around the area – here are our favourites.

The main beach in Abersoch is the busiest, easiest to reach and most user-friendly in the area. 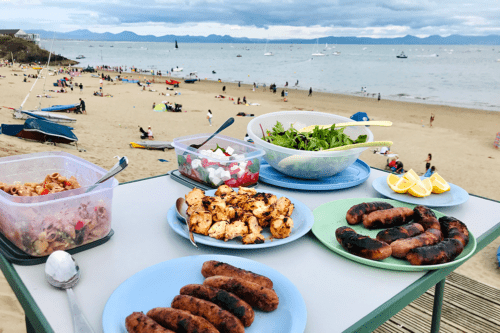 It stretches about a mile and a half with plenty of golden sand, a steep hill up to beach huts and sand dunes to explore.

At the far left end (if facing the sea), near the South Caernarvonshire Yacht Club/SCYC, there are some rock pools at low tide.

At the other end of the beach towards the lifeboat station, there is less soft sand but it tends to be quieter and dogs are allowed.

The beach is sheltered and safe for swimming under normal conditions, with a motor boat exclusion zone. It is also popular for water sports like sailing and wind surfing.

There are great views – it faces St Tudwal’s islands and behind that, west Wales mountans.

The beach is a short walk from the centre of Abersoch and and can be accessed from two car parks detailed below.

*The main car park is Beach Car Park, Golf Road, Abersoch. You have to pay to park all year round. A very short walk brings you past a shop/cafe and out on to the slipway in the middle of the beach.

There is another, smaller, pay car park at the SCYC (yacht club) end of the beach and there is also a cafe there. Access to the beach is via a short, steep slope.

*Toilets in the main car park.

MORE:  We take our children on a fairy tale family holiday staying at a castle in Anglesey, Wales

*Some of the beach huts are available to hire.

*Dogs are allowed on the right side of the slipway all year and the rest of the beach except between April 1 and September 30.

This long sandy beach is mostly used by people with chalets at the upmarket Warren Holiday Park. 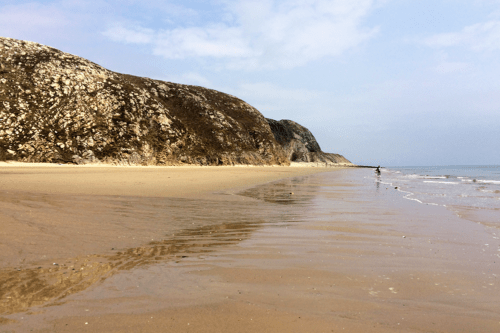 However it is still a public beach and one of our favourites. It’s a good beach for bathing and there are several streams to play in.

You can also explore the rocks around Llandbedrog Head. The wide expanse of wet sand at low tide means plenty of space.

It’s usually pretty quiet as it can be harder to access unless you are staying at the Warren.

This one and a half mile long beach is in front of the Warren Holiday Park and stretches from Abersoch harbour to the headland of Mynydd Tir-y-Cwmwd.

The Abersoch end is known as Traeth Tywyn y Fach while the headland side is called Quarry Beach.

*Abersoch end: Park along the A499, then walk through the National Trust’s Tywyn y Fach property.

*Quarry Beach end: There is a car park behind the beach which can be reached via narrow lanes off the main Abersoch to Pwllheli road by the red postbox.

*Via The Warren holiday park: Park in a layby on the main road and walk through the holiday park along a public footpath.

There are no toilets apart from at the holiday park for people staying there.

There is no cafe or shop, so take supplies!

Dogs are allowed at all times.

Porth Neigwl, better known as Hell’s Mouth, is a windswept beach which gets its name from the amount of shipwrecks which washed up here. 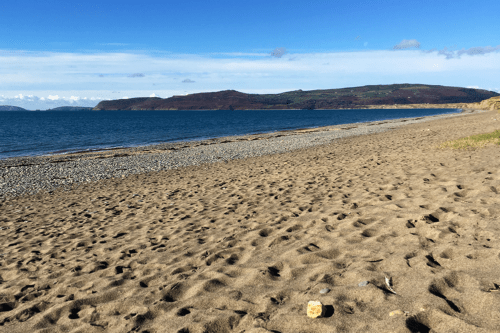 This is the area’s premier surfing beach and often sees big waves.

The beach is mostly stony with some sandy areas and – at four miles long – has plenty of quiet spots.

MORE:  Fun for all the family at GreenWood Forest Park in North Wales

Take care when swimming as there are strong currents and undertows – it is only suitable for strong swimmers.

There are low sand dunes with some World War Two concrete training structures to discover but stay away from the crusty cliff edges.

We love it for a wild and windy walk as it’s only a short drive from Abersoch.

It is on the south-west side of the Llŷn Peninsula in Llanengan, near Pwllheli, LL53 7LG.

There’s a free car park with about 15 spaces and then a five-minute walk down a sandy path to the beach.

There are no toilets or catering.

Porth Oer is better known as Whistling Sands for the noise the sand makes if you step on it. A noise and an idea which children love. 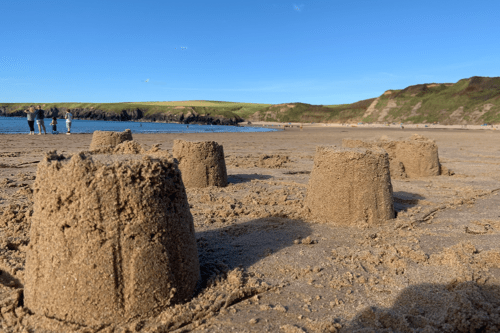 This beautiful golden beach is a perfect size for families.

There is plenty of soft sand, a nice gentle bay for swimming and rock pools at either end to mess about in.

The beach is in one of the more remote parts of the Llŷn Peninsula and a 25 minute drive from Abersoch but is well worth it.

Explore the small caves at the right hand end of the beach, and climb up the footpath there for spectacular views (hold on to small children).

It is in Aberdaron, Pwllheli, LL53 8LH. (Not to be mistaken for Aberdaron Beach).

There is a National Trust car park on the road above the beach. It is a very steep three-minute walk down (and a slower walk back up)!

*A cafe on the beach serving hot and cold food and drinks including pizza and ice-cream which you can eat there or take on to the beach. The pizza is delicious. 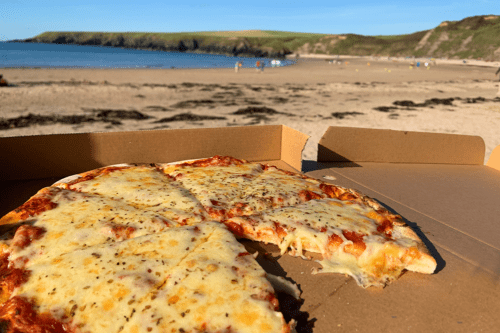 Wishing I was there now and eating this pizza instead of just writing about it!

This beach is an easy stop-off with children as there’s a car park, toilets and a cafe. 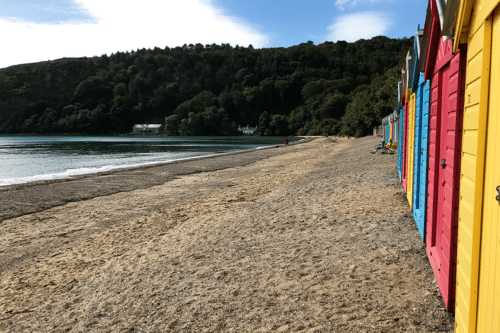 It’s a good place for children to swim, plus there are streams and pools to play in.

MORE:  We discover all the best places and activities for children in Exeter, Devon

Intrepid families can walk from the beach up the steep steps to the top of Llandbedrog headland Mynydd Tir y Cwmwd, but keep hold of children. 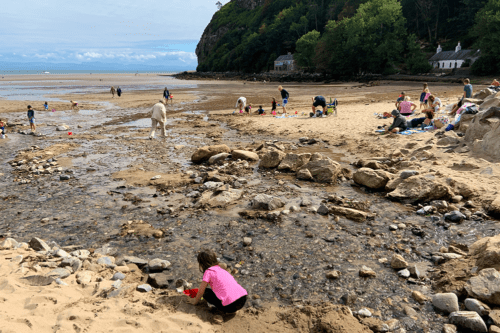 Half way up is the Tin Man sculpture.

But there’s a restaurant right on the beach plus as it’s a sheltered spot, you could try a beach barbecue.

In Llanbedrog, between Abersoch and Pwllheli on the south side of the Llŷn Peninsula.

There is a National Trust car park a two-minute walk from the beach (up a hill and steps). Address: Llanbedrog, Pwllheli, LL53 7TT.

*Toilets near the beach.

This small horseshoe-shaped bay is spectacular but tricky to reach. 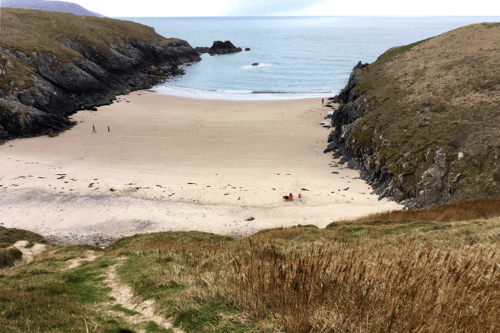 To get there you must drive through a private farm and pay an entrance/car park fee to reach a grassy parking area.

From there you walk down narrow and steep tracks to reach the remote beach.

It is a sheltered cove with some excellent rock pools and makes a good swimming spot.

The sand is soft and there are amazing views to be had by following the Wales Coastal Path in either direction from the cliffs above the beach.

Port Iago beach faces south-west on the Llŷn Peninsula in Aberdaron, between the headlands Graig Ddu and Dinas.

The car park above the beach is accessed through Ty Mawr farm which has a pay and display parking machine so take some £1 coins.

You can also reach the beach on foot from the Wales Coastal Path via sand dunes.

Dogs are allowed but have to be in vehicles when going through the farm.

This large beach is a tricky one to get to but is a rewarding find once you get there, at low tide. 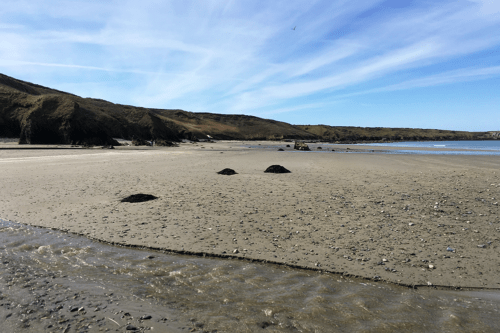 It can be muddy as the route from a car park follows a stream. Once you reach the beach, there is a steep walk down to the sand.

The beach itself is wide with dramatic rocks, lots of rock pools and in the middle there is a channel which you can paddle and play in.

There can be strong currents so swimming is not advisable. 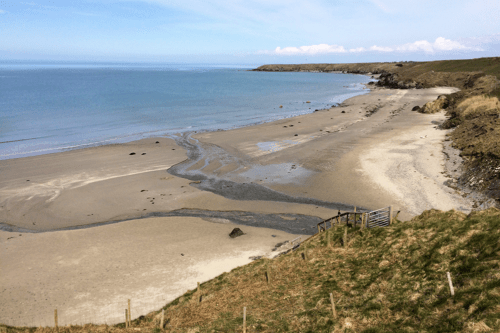 Penllech Beach is a mile north of Llangwnnadl on the northern tip of the Llŷn Peninsula.

You can park at a small car park on Afon Fawr and then follow the beach path for about 10 minutes across a field.

None, there is a cafe at a near by campsite about a ten minute walk from one end of the beach.

This is a lovely, sandy, two-mile beach but the most memorable part of it is the pub at one end, the Ty Coch. 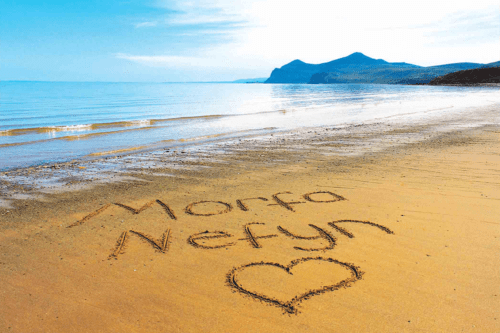 There are a few beach huts and some great views as well as rock pools at low tide near the headland.

We like to walk from the car park down on the beach, along to the next section, Traeth Porthdinllaen, where the pub invitingly waits and then back along the road through the golf course.

Between the village of Nefyn and the fishing hamlet of Porthdinllaen on the north coast of the Llŷn Peninsula.

There is a National Trust car park above the beach – address Morfa Nefyn, Pwllheli , L53 6DA.

Dogs are allowed on one side of the beach all year but are banned for the other side between April and September.

*Main picture available to buy as a canvas, print or greetings card from sand-writing.com.